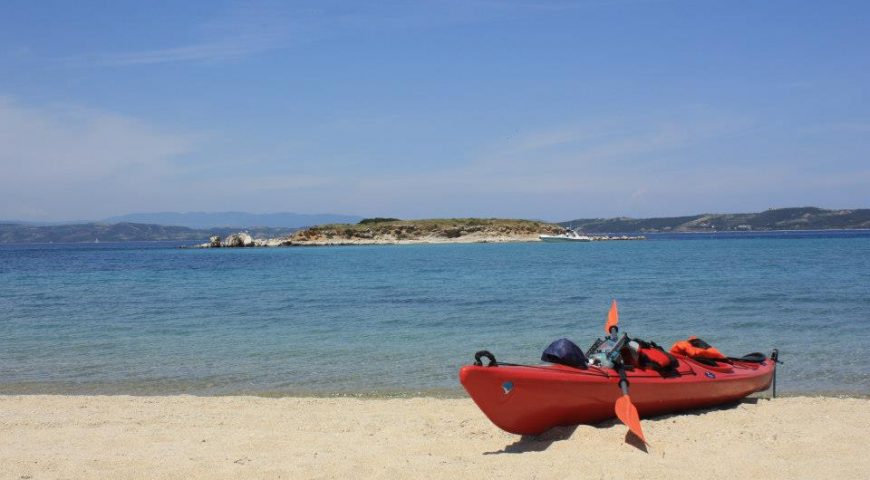 Despite the current European economic climate, interest in sea kayaking in Greece has increased steadily over recent years. Not only are there local providers and some expats, but also a number of British based providers offering a variety of guided trips and/or formal courses. Greek people are very friendly, always willing to help and fortunately for us speak very good English, especially younger they are.

If you can keep your luggage down to the 10kg hand allowance, the cost of flights can work out very reasonable, especially when compared to the cost of travelling from the south of the UK to Scotland. 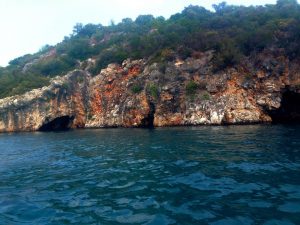 Sitting under the shadow of Greece’s highest mountain “Mount Olympus” (2917 meters), Halkidiki offers a suburb range of sea kayaking opportunities. It is well serviced by an international airport at Thessaloniki and a good road network, which reduces travelling time substantially, when compared to the islands of the Aegean where an additional ferry journey is often required. Flight time from the UK is approximately three and a half hours.
Halkidiki consists of 3 separate peninsulas, locally known as legs. The western leg is “Kassandra” and is separated by the Gulf of Toroneos from the central leg “Sithonia” which in turn is separated by the Gulf of Sigitikos from the eastern leg “Athos”.

Kassandra is less than an hour’s drive from Thessaloniki and its northern part is the most popular holiday destination for foreigners, abundant with large hotels and night clubs The southern tip of the leg, however offers a remote coastline, secluded bays and steep cliffs, supported at the end of the day by fine regional wine and excellent local sea food! Historically it is also famous for its hot springs.

Sithonia is without doubt the gem of the area for sea kayaking, offering single or multi day trips. It is far quieter, relaxed and very popular with locals.
Both sides of the peninsula have a range of islands at varying distances from the shore. The area is higher than Casandra and in places heavily wooded all the way down to the shoreline with a mixture of deciduous and carboniferous trees. As you progress south, the coastline becomes more rugged with cliffs slowly increasing in height, until you reach the entrance of Port Koufo, one of Greece’s popular sea cliff climbing areas, similar to that of Gogarth on Anglesey. 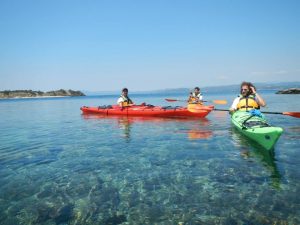 The eastern leg, Agio Oros, is the home of the area’s highest mountain, Mount Athos (2.003 metres). Mount Athos is known as the holy mountain and hundreds of pilgrims make the trip to its summit each year. However only male pilgrims are allowed! The lower two thirds of Agio Oros is a World Heritage site and closed off to the female population. Self-governed, it is home to over 20 Monasteries supported by a community of Monks who produce most of their own food. Products like honey and wine subsidise their existence. Access to this closed community is only allowed through special written permission, requested in advance and visitors are then collected by boat from Oranoupoli. Access by kayak is strictly forbidden as you are required to stay at least one kilometre off shore. Circling the peninsula is in excess of what could reasonably be achieved in a day without landing. However, on the north-western side of the leg is the picturesque village of Ouranoupoli with the island of Ammouliani less than a mile off shore. A circumnavigation makes an ideal day trip. 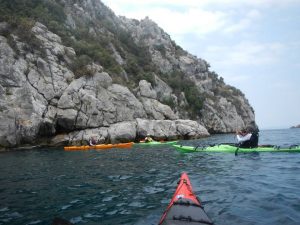 One of the area’s challenges is starting from Oranoupoli and making the crossing to Ammouliani, then the long crossing of the Gulf of Sigitikos (approximately 6 nautical miles) to Diaporos Islands, just north of Vourvourou. Combine this with a rounding of the Sithonia peninsula and the crossing of the Gulf of Toroneos (approximately 9 nautical miles) to Cassandra, you are guaranteed a fine multi-day expedition in anyone’s logbook!

The best time of year for kayaking in Halkidiki is probably May/June and September/early October. The main summer months though usually more settled, are probably too hot for most folks to find comfortable, as daytime temperatures reach well into the mid ’30s! Winds slowly pick up during the day as is typical for the Mediterranean this time of year, with sea breeze reaching up to Beaufort force five or six by late afternoon and only dying down during the early evening.

The winter months offer long settled periods. Although temperatures will be well lower, similar to that of spring in the UK, there is a greater chance of stronger winds and a greater chance of unsettled weather. However, Mount Olympus will probably be clothed in snow and most holiday facilities closed for the season. If you want quiet and remote, this is the time to come. With a very small tidal range, the Mediterranean does not have the strong tidal streams experienced in parts of Britain. That said, between some of the islands, constrictions and shallowing’s off the more exposed headlands tidal flow can sometimes be experienced. This is more likely during spring tides causing waves to increase in height when met with opposing winds. 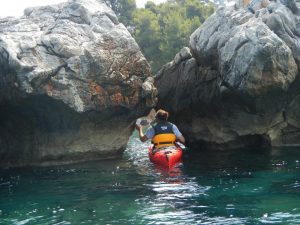 The area offers huge potential for those looking for a relaxed paddling experience in a different area/country with the opportunity for some “offshore” challenges.

Read the whole article in the Paddler Magazine

One thought on “Our Origins”